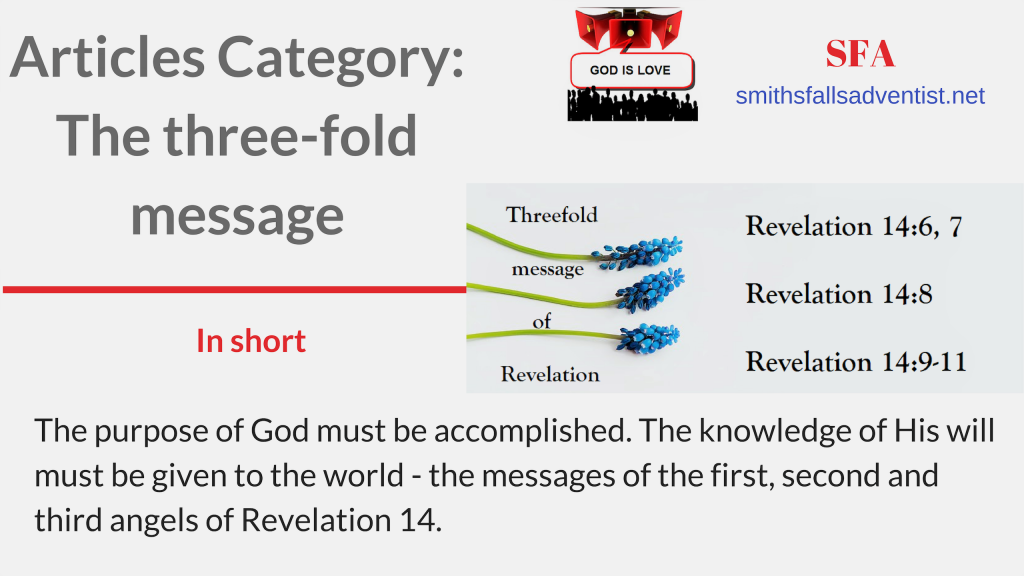 God sends to humans important warnings at the end of time. He requires every person endowed with reasoning powers to heed the message.

Everyone is to hear the last call to the marriage supper of the Lamb.

Alleluia: for the Lord God omnipotent reigneth…Blessed are they which are called unto the marriage supper of the Lamb. These are the true sayings of God. Revelation 19:6, 9.

All articles here are intended to proclaim the present truth – the light of the great threefold gospel message of Revelation 14.

The closing message of the gospel will be given to every nation, and kindred, and tongue, and people. Revelation 14:6.

Nevertheless all three of the messages are still to be proclaimed. It is just as essential now as ever before that they shall be repeated to those who are seeking for the truth.

The result of the threefold message will be announced: Here are they that keep the commandments of God, and the faith of Jesus. Revelation 14:12.

And this message is the last to be given before the coming of the Lord. Immediately following its proclamation the Son of man is seen by the prophet, coming in glory to reap the harvest of the earth.

The purpose of God must be accomplished

The knowledge of His will must be given to the world.  In this day, God has called His church, as He called ancient Israel, to stand as a light on the earth.

Moreover, to communicate to the world the messages of the first, second, and third angels of Revelation 14. 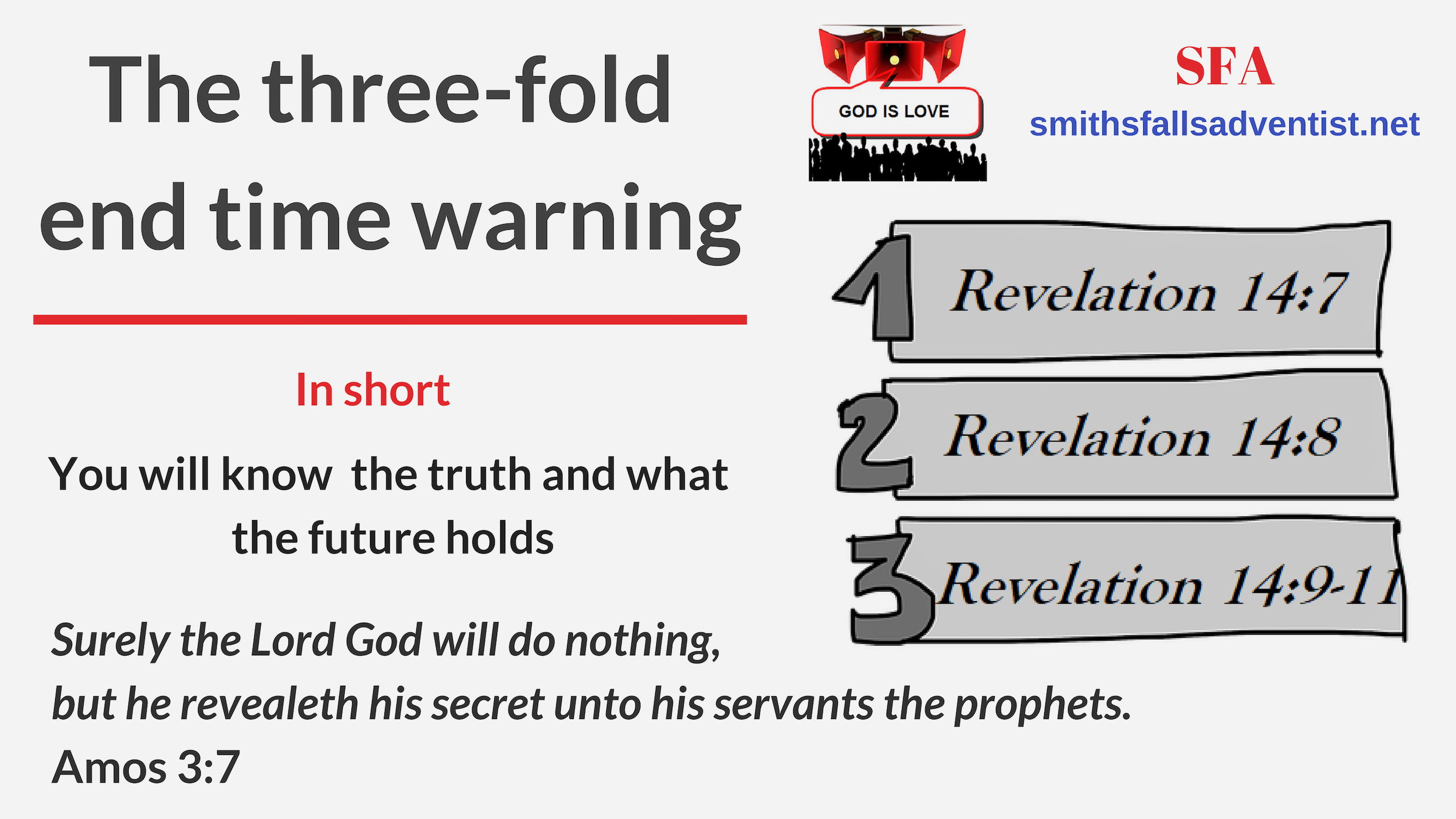 Scripture declares that the first angel would proclaim the message to every nation, and kindred, and tongue, and people:

Saying with a loud voice, Fear God, and give glory to him; for the hour of his judgment is come: and worship him that made heaven, and earth, and the sea, and the fountains of waters. Revelation 14:7

Christ came to our world to represent the character of God as it is represented in His holy Law.

For God’s Law is a transcript of His character. Christ was both the law and the gospel.

The angel that proclaims the everlasting gospel proclaims the law of God. For the gospel of salvation brings men to obedience of the law, whereby their characters are formed after the divine similitude.

The Sabbath memorial, declaring who the living God is, the Creator of the heavens and the earth, has been torn down.

A spurious sabbath has been given to the world in its place. Thus a breach has been made in the law of God.

The second angel, who, flying through the midst of heaven, cried – Babylon is fallen, is fallen, that great city. Revelation 14:8.

This message was first proclaimed by the servants of God in the summer of 1844. As a result, many left the fallen churches.

In connection with this message the “midnight cry” (See Matthew 25:1-13) was given: Behold, the Bridegroom cometh; go ye out to meet Him.

It had a more direct application to the churches of the United States, where the warning of the judgment had been most widely proclaimed and rejected.

But the message of the second angel did not reach its complete fulfillment in 1844.

As the churches have continued to reject the special truths for this time, they have fallen lower and lower.

Not yet, however, it can be said that Babylon is fallen, . . . because she made all nations drink of the wine of the wrath of her fornication.

She has not yet made all nations do this. The work of apostasy has not yet reached its culmination. The perfect fulfillment of Revelation 14:8 is yet future.

Though we are now under the proclamation of the third, all three of the messages are still to be proclaimed.

The warning of the third angel, which forms a part of the same threefold message will be no less widespread.

Its inscribed banner – The commandments of God and the faith of Jesus, is to be raised on high.

The power of the first and second messages will be intensified in the third. It is represented in the prophecy as being proclaimed with a loud voice by an angel flying in the midst of heaven, and it will command the attention of the world.

The world will be divided into two great classes – those who keep the commandments of God and the faith of Jesus, and those who worship the beast and his image and receive his mark.

Although church and State will unite their power to compel:

And he causeth all, both small and great, rich and poor, free and bond, to receive a mark in their right hand, or in their foreheads. Revelation 13:16

yet the people of God will not receive it.

The prophet beholds them that had gotten the victory over the beast, and over his image, and over his mark, and over the number of his name, stand on the sea of glass, having the harps of God, and singing the song of Moses and the Lamb. Revelation 15:2, 3.

The end of all things is at hand.

The last message of warning and mercy is to go to every nation and kindred and tongue, to take out of them a people for His name . And the earth shall be lightened with His glory. Revelation 14:6-14; Acts 15:14; Revelation 18:1.

We pray that all this will be your experience in the power of the Spirit.

Know God – about God and His Only-begotten Son Jesus Christ »

Experience God – His love, mercy, righteousness, and other awesome attributes of His character »

Victory in Christ – the wonderful possibility of being like Christ »

Home – God and His power to save and transform»

Thank you for stopping by.

We pray that the Holly Spirit will set the Truth home in your soul.

May your own experience in beholding Christ helps you find that God is exactly who He claims to be.

Don’t know where to start or need help? 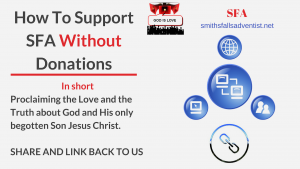 Send us a short message »

Find out how to support us WITHOUT donations »

Learn more about SFA and our mission »

Commandments Of God And The Faith Of Jesus: A Banner For Truth And Righteousness

God alone could say the very thing needed for our salvation, so that no one needs to error therein.   Here is the patience of the saints: here are they that keep the commandments of God, and the faith of Jesus…. Read More ›

The Third Angel’s Message of Revelation 14 is the last message of mercy that is ever to be given to our world. God’s messengers, empowered with the Holy Spirit will proclaim the Lord’s solemn and sacred message of warning… Read More ›

The “Falling Away”: Takes Place Before Second Coming Of Christ

The apostle Paul declared: Except there come a falling away first, and that man of sin be revealed, the son of perdition, 2 Thessalonians 2:3 – will be no immediate coming of Christ. These important developments in the religious world… Read More ›

Babylon is fallen, is fallen, that great city, because she made all nations drink of the wine of the wrath of her fornication. Revelation 14:8 Origin of Babylon Question: What is the origin of the term “Babylon”? Answer: And Cush begat… Read More ›

Fear God – Read It As Reverence in Duty or Christian Grace

Fear God defined. How the Lord uses fear in His Word how Christians comprehend it? Fear God is the message given to all people in Revelation 14. When enjoined as a duty or Christian grace it refers to reverence. It… Read More ›

The messages of Revelation 14 proclaimed by the angels flying in the midst of heaven are the everlasting gospel. This is he same gospel that was declared in Eden when God said to the serpent – I will put… Read More ›