Settle into God’s truth that you can not be moved. Live with eyes fixed on the Savior and worship God in the beauty of holiness. Bear witness by your life to the truth of the words: The statutes of the Lord are right, rejoicing the heart; the commandment of the Lord is pure, enlightening the eyes. More to be desired are they than gold; yea, than much fine gold; sweeter also than honey and the honeycomb.  Psalms 19:8, 10. 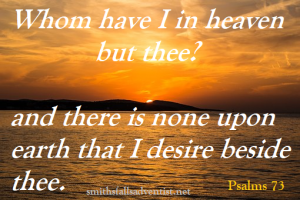 The jewels of truth lie scattered over the field of revelation. They have been buried beneath:

The great storehouse of the truth as it is in Jesus

All articles and media here are intended to help you settle into God’s truth that you can stand on sound doctrine. For the time will come when they will not endure sound doctrine; but after their own lusts shall they heap to themselves teachers, having itching ears; And they shall turn away their ears from the truth, and shall be turned unto fables. 2 Timothy 4:3,4.

God created humankind in His own image, after His likeness – male and female. Adam and Eve are the created children of God – the origin of the human race.  They were holy and happy in bearing the image of… Read More ›

The Great I AM is the Lord God Almighty, Creator, Father, Governor and Redeemer of all. That is My name: and My glory will I not give to another. I am God, there is none like Me, and there is… Read More ›

The Ten Commandments were spoken by God and written by His own hand. They are of Divine origin and not a human constitution. They are expressed in human language, presenting a union of Divine and human, which exists in the… Read More ›

The Seventh-day Sabbath is a sign of the creative and redemptive power of Christ. It points to Him as the source of life, knowledge, love and truth. It recalls mankind’s ancient glory, and thus witnesses God’s purpose to re-create us… Read More ›

The gift of life has been freely and graciously offered to fallen mankind. Through Christ we may become partakers of the divine nature and obtain the gift of eternal life. It has been abundantly provided for all who will come… Read More ›

Walk by faith and be loyal and true to Thus saith the Lord. The Word of God is: true and alone endures forever not uncertain or powerless the only fixed, changeless thing that the world knows the same yesterday, today,… Read More ›

The Word Of God: The Love Of The Truth Gives New Live

The Word of God is His revelation to mankind and infallible counsel to you. The Holy Writ is a transcript of the will of your Maker and Redeemer. It is an expression of His divine wisdom and His voice speaking… Read More ›

The will of God is made plain in His Word. He has made a pledge to restore His moral image in you. It is His desire that you shall be one with Christ and complete in Him. Furthermore, that you… Read More ›

Christ officiates in the Heavenly Sanctuary from the Holy of Holies. He works in the hearts of humans, inviting  them to come to Him who was dead, but is alive forevermore. The purifying of the soul here on earth must… Read More ›

The Gift Of Repentance: Whom God Pardons He First Makes Penitent

The gift of repentance is the gift of God through Christ. By God’s love manifested upon the cross and pleading of His Spirit, He pursues believer’s repentance. And I, if I be lifted up from the earth, will draw all… Read More ›

The love of God for His rebellious children is the most wonderful thing that the universe knows. It will be constantly unfolding throughout the ceaseless ages of eternity. Our human mind is not capable of understanding its full significance…. Read More ›

The Investigative Judgment Of The Professed People Of God

The investigative judgment of those who in all ages have professed to be followers of Christ started in 1844, when our High Priest entered the most holy place of the Heavenly Sanctuary In the final atonement and judgment the only… Read More ›

The Sabbath Of The Lord: An Everlasting Memorial Of His Creation

God established the Sabbath to be an everlasting memorial of His work of creation. He instituted the seventh day in Eden. It keeps ever present the true reason why worship is due to God – the distinction between the… Read More ›

The law of God is truth – unchanging, eternal truth. It is holy, just and good. God’s law is a transcript of His own character and reflects the principles of His government. It is the standard of christian character…. Read More ›

Truth originates in God. He is merciful and gracious, longsuffering, and abundant in goodness and truth. Christ Himself is the Truth – Of a truth thou art the Son of God. In the beginning was the Word, and the Word… Read More ›

How To Worship God In Spirit And Truth

In order to worship God in Spirit and Truth, we must be born of the Divine Spirit and accept the Truth as it is in Jesus. True worship is the fruit of the working of the Holy Spirit. Except a… Read More ›